The Virgin (The Original Sinners, The White Years #3) by Tiffany Reisz — Nora and a nun. Kingsley and Juliette – a white Frenchman and a black Haitian woman. This should be good!

Golden Son (Red Rising Trilogy #2) by Pierce Brown — Darrow was a Red living in underground Mars. He’s exacting his revenge and joining the Sons of Ares to take down the Golds who have torn his life apart. But to do that he must become one of them. In this book we will see Darrow become a favorite among the golds, but he has a lot of anger in him that could lead to trouble (or someone finding out his true identity). I hope it’s just as gritty and epic as the first book! — HA

The Mime Order (The Bone Season #2) by Samantha Shannon — Heralded as the next “Harry Potter” because of its seven expected installments and because of its British author, this second novel is predicted to be just as “other-worldly” as the first.

Last American Vampire by Seth Grahame-Smith — A follow-up to Abraham Lincoln: Vampire Hunter! (One of my favorite books!) Grahame-Smith also wrote Pride and Prejudice and Zombies, so you could say I’m a fan of his work. I won an ARC from Goodreads so look for a review coming soon! — HA

Gaiman — I have only read one Neil Gaiman short story, “How to Talk to Girls at Parties,” and I loved it. I have, however, read three of his novels, and needless to say, I love his writing. This collection seems to be more dark, with heavier themes, but that should not deter fans of his work. — HA

Carry On by Rainbow Rowell — I should probably 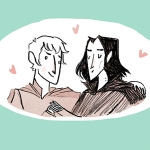 read Fangirl before reading this, but I couldn’t resist the description. Simon Snow is a Harry Potter-like fictional character from Fangirl (title character writes fanfiction about him) who’s getting his own novel. Fanfiction within fiction becomes fiction itself, or something like that. Very meta. — TB

Strange Fruit, Volume I: Uncelebrated Narratives from Black History by Joel Christian Gill — A collection of biographies about little known figures in Black History, told in a graphic anthology. The collection of nine stories includes those about Henry “Box” Brown, a slave who escaped by mailing himself to Philadelphia; Bass Reeves, the most successful lawman in the Old West; and the story of America’s first integrated school.

God Help the Child by Toni Morrison — Morrison is THE Great American Novelist and no one will tell me different! Her next book about how a childhood trauma affects adulthood is expected in April. — HA

A God In Ruins by Kate Atkinson — Kate Atkinson became one of my favorite writers when I read Life After Life in 2013. This year she’s publishing a companion novel that follow’s Teddy, the brother to Ursula in Life After Life, as he transitions from war to peacetime in the 1940’s. — HA

Fatal Scandal (Fatal #8) by Marie Force — I fell in love with Washington D.C. detective Sam Holland and her hunky husband Nick Cappuano almost immediately. Now, in it’s 8th installment, the Fatal series sees Sam and Nick dealing with Nick’s appointment as Vice President and a challenge to the adoption of Scotty, their would-be son. Plus, some other DC big wig dies and Sam has to solve the murder while dealing with office politics. OAN: Not a big fan of the new covers, Harlequin. — TB

*Come back and visit this post often, as I’m sure we’ll be adding to this repeatedly. Oh yeah, leave your recs in the comments*