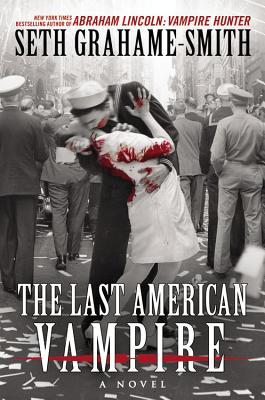 The perfect blend of American History and fantasy is the best way I can describe The Last American Vampire, which tells the story of the life and times of Henry Sturges, Abraham Lincoln’s closest vampire friend. He’s not someone you would know from the history books, but he has played a role in many defining American moments: Roanoke colony, the American Civil War, and WWII among others.

The Last American Vampire is the sequel to Abraham Lincoln: Vampire Hunter. [Spoiler Alert] At the end of ALVH, it is hinted that “some people are too good to die.” This is the part of the story that begins LAV. Henry, overcome with grief at the loss of his friend, turns him into a vampire, of which Abraham immediately rejects himself and throws himself out of a window (a bit abrupt). Henry presumes him dead, and is soon called to New York on the orders of the Union (the North in ALVH, but an actual organization of vampires who helped stop the Civil War against the Confederate Southern, pro-slavery vampires).

Henry is told members of the Union overseas are all being hunted and executed in horrible ways. And he’s asked to track the vampire responsible. Leaving New York and coming to London is cathartic for Henry since his life in America has caused him so much pain recently.

We soon learn the story of Henry’s making, a British colonist who goes to the Roanoke with his new wife. Things take a horrible turn when a vampire, Crowley, is discovered. His only natural defense was to murder all of the colonists, but somehow Henry survived to try and fight him off. Crowley takes this opportunity to turn him into a vampire, which Henry is resentful of. The only two people to survive were Henry and a baby named Virginia Dare. Henry is able to escape Crowley and run away with baby Virginia to a Native American tribe. He learns how to be a “good devil.” [Spoilers redacted]. We learn about Henry’s life post- making, living with Natives and post-Civil War, hunting Jack the Ripper with Bram Stoker and Sir Arthur Conan Doyle. And when the story matches up to the present, searching for a vampire killer, Henry has met many important American figures: Nicola Tesla, John D. Rockefeller, Theodore Roosevelt, plus his old friend Abraham Lincoln. After a rocky reunion, they are off to fight the Nazis, naturally.

Henry’s life is very epic, and the writing of this book is different than ALVH. While ALVH is more dense with factual information, the author was able to use that premise, but make a completely new character to build around American history, which I found made the story more interesting. I’m sure many people have thought about what it like to live forever, and Henry clocks in around 500 years old, that’s as good as we can ask for.

If you’re still not convinced that Seth Grahame-Smith is an American treasure, watch the book trailer:

In the interest of full disclosure, I won an ARC of this book on Goodreads. Thanks to Goodreads and Grand Central Publishing for giving me a copy of a book I would have bought anyway!

One thought on “REVIEW: The Last American Vampire by Seth Grahame-Smith”

Another Monday. Another new book to get me thru this. Technically, this week starts my official #wfh stint. But I'm still in bed, so that tells you how much work is getting done. That's part laziness and part the nature of my job. 🤷🏾‍♀️ This week is THE WORST BEST MAN, and I'm already feeling it. -TQ @theqissilent416 . #books #booksofinstagram #bookstagram #booklover #bookworm #booknerd #readaromance #romancereader #BooksConnectUs #quarantinereads #bookblogger
Happy Friday! Continuing my social distancing readathon with THE PRIEST by @tiffany_reisz. What are your reading plans this weekend? . . #books #booksofinstagram #bookstagram #booklover #bookworm #booknerd #readaromance #romancereader #BooksConnectUs #OriginalSinners #ThePriest
Things are scary in the world currently. And we're all trying to find ways to cope with being distant from each other. Human contact and interaction are necessities. But social distancing doesn't have to be emotional distancing. Books for me have always been more than just something to occupy my time or to escape into. Books truly do connect us. With other readers. Wth ourselves. I've said more than once that books saved my life and sanity. And I'll be depending on them now to once again get me through a difficult time. To keep connected to what's beautiful in this life. To hope and happy endings. -TQ Current read is #acowboytoremember by @rebekahweatherspoon. #books #booksofinstagram #bookstagram #booklover #bookworm #booknerd #readaromance #romancereader #BooksConnectUs #stayhome
The new @mcnallyjackson in @citypointbklyn is gorgeous!! . . . . #bookish #bookstagram #bookshelf #bookstore #booksofig #bookworm #booknerd #booksbooksbooks #bookshelves #shoplocal #brooklyn #nyc #mcnallyjackson #booksandbeans #currentlyreading