We picked up Outlander Season 1, Part 1 Blu Ray special Edition from Target this week and decided to review it as our first page to screen adaptation. Since we’ve seen the first 8 episodes too many times to count, for this review, we’ll focus just on the features and deleted scenes.

Let’s start with the packaging. 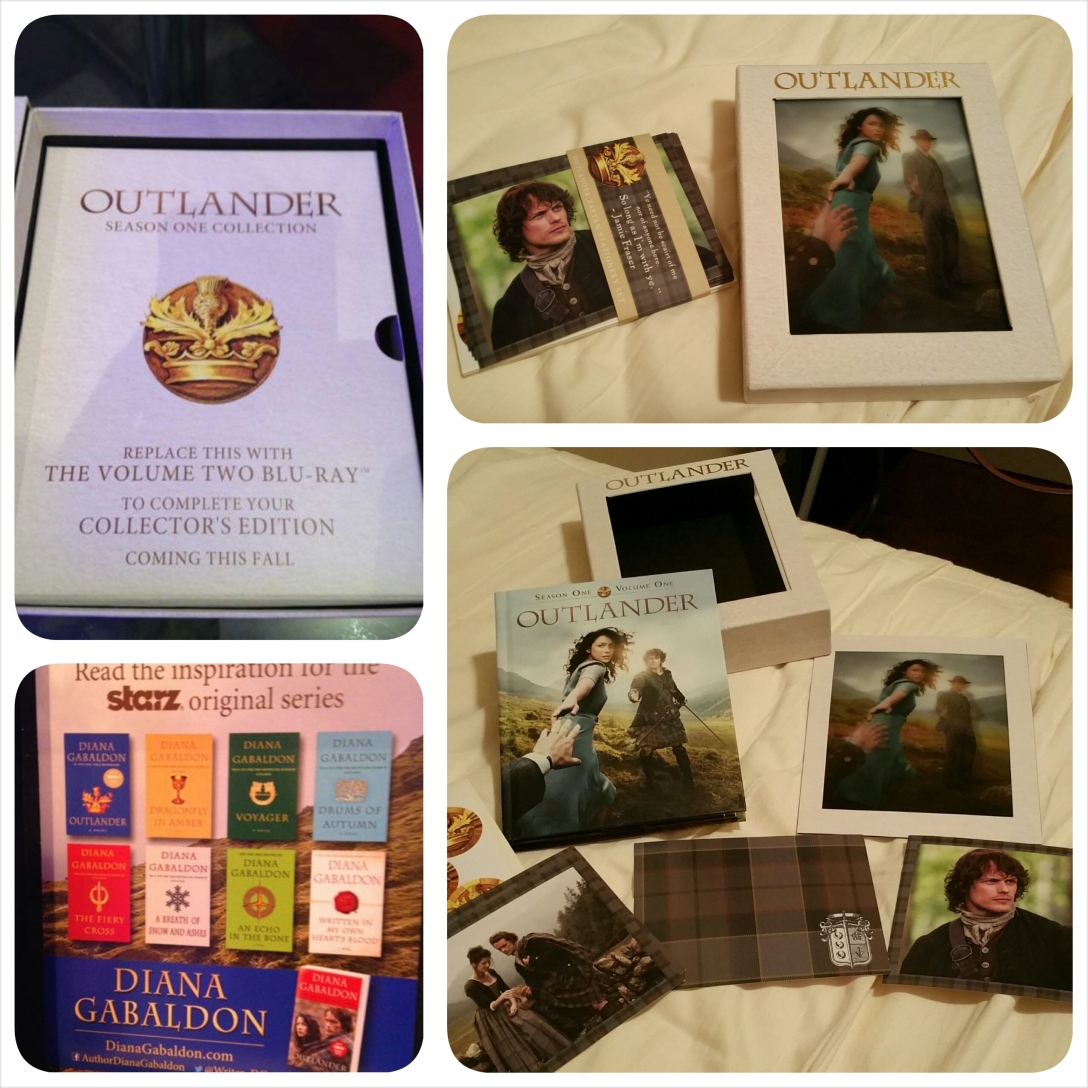 Everything about it is so well done. It’s beautiful and perfect. The stationery. The actual blu-ray case that looks like a book, complete with gorgeous hi-res production stills, script excerpts, and an intro written by Diana Gabaldon.

And there’s this thing (its fancy name is lenticular), which we adore:

Of the special features, there are 6 behind-the-scenes looks, 4 of which are blu-ray exclusives, and 21 deleted scenes from all 8 episodes.

An Epic Adaptation — Nothing really new here, except the awesomeness of seeing Matt Roberts’ face (!!) and his chin puff, which TQ wants to call a Van Dyke beard, but isn’t sure that’s quite what it is. The rest is the usual we’ve heard from Diana and Ron, about how DG came up with the book and how Ron learned of it from Terry and Maril Davis, his producing partner. There are a few short interviews with the cast, but if you’ve attended any Outlander event over the past year or watched them online, you’ve heard it before. 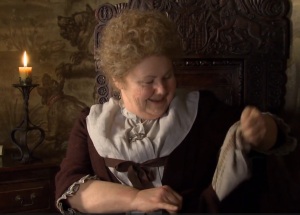 The Dresses & Kilts of Outlander — Terry Dresbach is a genius and a goddess of costumes. What she and her team have done for this series is beyond words. There is such detail in each piece created for the characters. A particular favorite is the pocket sewn into one of Mrs. Fitz’s dresses. That might be something we never even see on screen, but it shows a real dedication to authenticity.

Casting Outlander — We’ve all heard the story about casting Jamie and Claire, so it was nice that they also discussed casting Rupert, Angus, Dougal, and Tobias.

On Location: Castle Leoch and the Magic of Scotland — The producers love authenticity. In this feature, it was especially prevalent when they chose to film in Scotland. Like they mention, the country is it’s own character.

Emerging a Scot: Cast Goes to Boot Camp — This feature was fun because we got to see the cast out of character, just learning. Gàidhlig lessons, how to ride horses, and kilt training, were all a part of boot camp. Authenticity, especially with the Gàidhlig lessons, again becomes apparent. And the actors were eager to bring that to their roles.

A Walk Through the Sets & Stages with Ronald D. Moore — The sets and stages where Outlander is produced are in a warehouse in Scotland. Ron D. Moore and the other producers have an amazing budget to be able to do all the things they do: costumes, carpentry, weapons, and the sets all come to life in this building. It was cool to see the craftsmanship and epicness of putting together a television show.

For the deleted scenes, we can only guess that what was chosen for the blu-ray were things that book fans would’ve wanted to see.

Episode 1 — These were more different interpretations of scenes that made the final cut. Most featured more Claire voice-over, so we’re glad TPTB went in a different direction.

Episode 2 — Scenes here were Claire first meeting with Colum, with additional dialogue, which we enjoyed and wished had made it into the final cut. Just a little more banter. Also of note is the scene in the stable with Claire and Jamie when he tells her about eating grass. We’re all for more Jamie and Claire bonding, so we would’ve loved to have seen that one screen.

Episode 3 — Again, more extended scenes or different interpretations with Claire and Geilis. We didn’t notice any change in dialogue, just more of it. Whatever was cut here didn’t add anything to the final scene we got to see.

Episode 4, Episode 5, Episode 6 — Nothing really stood out for us in these episodes’ deleted scenes.

Episode 7 — The Wedding episode has the most deleted scenes and this is where we thought some of these should’ve been kept in. It’s just our humble opinion and we love what Ron and crew have done with the show. But, we also loved this version of Jamie and Claire’s wedding. There was more humor, more guest reaction. We could see Claire’s fear and hesitation more, especially the part of the vows about being meek and obedient in bed. The pre-consummation conversation was also a favorite — to be there in the scene, hearing the story, rather than Claire telling us about it in voice-over. We also loved Jamie being charming and playful with his new bride. The other scene that we would’ve loved to have been kept is the little confrontation between Dougal and Murtagh in the stables, mostly because it explained Dougal’s real reason for choosing Jamie as Claire’s would be husband. Plus, it was more Murtagh, which is never a bad thing.

Episode 8 — The wig scene from the book features in this deleted scene. While it’s probably something book lovers would’ve like to have seen, it didn’t add or enhance anything, so we’re good without it.

That’s about it. Overall, we think fans will love having this collector’s edition blu-ray. For part 2, we’d like to see some bloopers and a feature with Bear McCreary.