**The opinions expressed here and other places around the internet are mine and do not reflect those of my employer, family, friends, inanimate objects that may become sentient, or plants.**

Over the weekend, children’s book author Meg Rosoff made a couple comments on a Kickstarter funded self-published book about a gay, black boy, Large Fears by Kendrick Daye and Myles E. Johnson. Her comments: 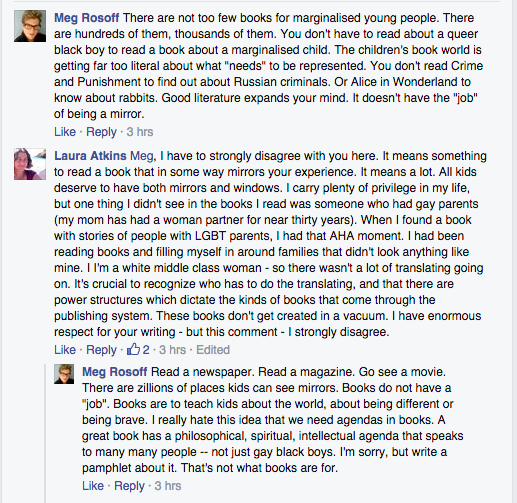 And when Twitter (rightfully) freaked out, she said this (which she just should have printed as a pamphlet, IMHO):

Meg comes across as a privileged white woman. A child is not going to read a newspaper for fun (and what are they likely to see but police brutality, school shootings, or other tragedies?), and magazines and movies are notoriously white washed. We want to reach marginalized children, not make them ashamed of themselves! A book has many jobs, one of which is encouraging children to read. She contradicted herself saying books shouldn’t have an agenda, and yet, the next sentence clearly contradicts the statement that books don’t have a job. Instead, books have “philosophical, spiritual, intellectual agenda.” So only what you write about is worth reading? How could the agenda of this book possibly impact you? As a reminder, it’s being funded on Kickstarter and is not involved with any major publisher (yet).

But also, she completely dismisses the thoughts of those who criticize her comments when she tweeted that she was writing diverse characters. Her book has an agenda! And based on her reaction to Large Fears, she probably shouldn’t be handling characters of color if they could be written into a pamphlet instead of a book, as if marginalized people can read newspapers, magazines, pamphlets or anything but books and suddenly be cured of their marginalization–as if it needs curing! Based on what Meg is saying, all marginalized people are easy to sum up on one sheet of paper, right? (Not letting the pamphlet thing go, Meg. I’ve only ever seen them passed out in the street, or at a doctor’s offices, not exactly the best way to reach people. Plus, pamphlets are summaries of larger, complex issues. Is this what you want diversity to be reduced to?).

I, too, am just a privileged white woman. What I’m saying is just an echo of those who were angered by Meg’s words. I found these two posts especially worth reading: from Bibliodaze, a line-by-line discussion of her comments; and a Medium post through the eyes of a Muslim girl on why mirror books are so important.

Tqwana and I recently attended a panel at New York Comic Con 2015 hosted by We Need Diverse Books called “I”m Not Your Sidekick.” At the panel one of the questions was about mirror books. Many of the panelists did not read a book that reflected them–and so they wrote it. Isn’t that the purpose of Large Fears? Isn’t that what everyone wants when they read, to see themselves represented? That’s why diverse books are so important because there are many people who don’t see themselves in “mirror books.” Why is the white narrative the only one worth telling? The panel brought up many issues within the publishing industry–which I acknowledge, and hope to one day help fix–but why should stories be dismissed because they are not “the norm”?

So many frustrations, and such slow change. I hope Meg Rosoff reflects on her comments and listens to the criticism, because this movement is real and is not going anywhere.

2 thoughts on “Hot Air: Meg Rosoff and the Diversity “Problem””